The toughest test in enduro!

This weekend Valentina took on the toughest test in enduro. As the Enduro World Series rolled into Valloire for the third race of the year things took a turn for the brutal. Set in the incredible mountains of the Haut Savoie, the race took place on the slopes overlooking the Col de Galibier, one of the most iconic mountain passes in road racing. With around 12,000 vertical metres to tackle over the weekend, 6,000 of those metres against the clock on around of trails, there is no race like this one, it is undoubtedly the most challenging race in international enduro racing. It is the ultimate test of bike and equipment – one that her Mojo HDR was more than up to.

What a challenge! I can barely move still today, it is defintiely the most physical race I have ever done. The trails this weekend were unbelievable, fresh cut lines through the meadows and forests, endless natural rock gardens and knife edge goat tracks… Wow, it was nothing short of epic and just to complete a race like feels like a huge achievement. It was one of those races were you form such strong bonds with the girls around you as we all battled on through the pain to reach the finish line on Sunday evening. I had one little crash this weekend, but that’s part of the game and to see my bike come through such a test of equipment without a single problem is a testament to the amazing bike and equipment we are racing with this year. 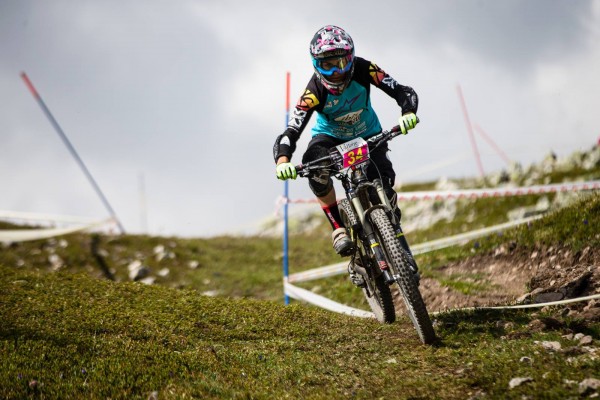 Manuels injury is healing well and he is back to light training, with an eye to returning to competition within the next month.

Next stop for the team is Madesimo for the third round of the 2014 Superenduro PRO series, 28-29 June.